This past weekend over 2,700 athletes were signed up to participate in what I would consider a friendly 70.3 course. It’s a great choice for a first time 70.3 course, training course or PR course. The swim wetsuit legal, the bike is flat and the run is flat. Those three elements make this course one of my favorite courses to race in. The weather can be hit or miss as it always is in . 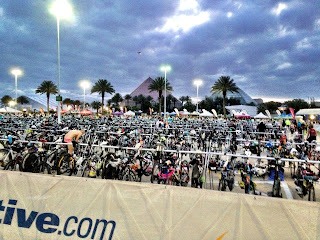 I raced this event in 2012 and decided to put it on my calendar as part of my training for IM Texas. I was coming off a 9 hour weekend block of training and decided to do what I would consider a half taper. That Monday before the event I felt a strain behind my right knee that ran from my upper calf muscle to the lower end of my hamstring. I decided to take Monday completely off to let it rest.
Tuesday came around and that strain was still there. I was a bit concerned at this point, and was hoping it was nothing serious. I was able to put in a run without any issues on Wednesday, but I could still feel the strain after completing the workout. I already had an appointment with Dr. Griffin on Friday and decided to wait until then to get it checked out. At the end of the week I cut out maybe 2 hours of cycling and kept the training intensity at an aerobic effort, knowing I was going to put in a good effort at the 70.3 event.


Coincidently last year I also suffered from a different injury that kept me from running three weeks leading up to 70.3 . I was a bit annoyed, but understood its part of the sport. Dr. Griffin worked his ART magic. I used to think I had a high tolerance for pain until I met Dr. Griffin. I’ll take that minor moment of discomfort during his treatments because they produce results.


I arrived in on Friday and was able to pick up my packet and visit with some of the vendors. I had family come into town to meet me, so Friday was very low key. I ate at a decent time and caught up with my family. We ended up at the new Boardwalk area, which I thought was pretty cool. It had just closed when we got there so we were unable to go check it out. Time flew by on Friday and before I knew it, it was midnight. I wasn’t too concerned about the time as I knew I would get at least seven hours of sleep.

I had three things to do two things on Saturday, take my bike out for a test ride, check my bike into transition and prep my race gear. During my test ride the first thing I noticed as I turned onto the Seawall was the wind. It was blowing hard enough to move me around, and made me feel uncomfortable enough to keep me out of the aero position. I finished up with the ride and threw in a short 10 minute run. Physically I felt pretty good. Not sure how to describe it other than my legs felt fresh and energy levels were high.


I made it to bike check in and found my bike spot. I took some time to figure out the ins and outs of T1 and T2. I ended up using a light poll and a sign outside of transition to help guide me to my bike during the event. I made sure my gears, breaks and computer were working properly. There was not much else to do her so I visited the vendors one more time then got out of the sun.


As I worked on my gear bag that evening I realized that I forgot my 6oz hand held plastic bottle I normally run with. This turned me upside down for a few minutes. I was upset with myself for forgetting this item. The last thing I wanted to do was stress out before the event so I quickly came up with a plan B, which in this case was a kid’s vitamin water bottle with a sports top from the convenient store. I figured why not it’s just a container and should work just fine.


I knew Sunday the wind was going to die down a bit and that the temperatures were going to be hot and humid. This worried me because I had not trained in these conditions. I knew I could be affected along with many others who were not used to the weather. I made it a point to drink plenty of water and electrolytes on Saturday. I also drank a little concoction I’ve used for the past 3 years on Sunday morning to help prevent dehydration.


I ran a bit behind schedule on the day of the event. I arrived at T1 with 20 minutes to spare. I set my gear up, aired up my tires, and did one last bike inspection. I was going into this event with a hard training effort expectation. I had some goals in mind I wanted to hit and was eager to find out if I could meet them.


My wave started at 7:55 a.m. The water temperature was in the high 60’s. As my age group made its way to the dock to jump into the water there was this one athlete who did not have a wetsuit on. I jumped in and felt how cold the water was and could not image how cold this person was going to be once he jumped in. There is about a 5 minute wait between each wave. The MC announced all athletes need to be in the water we have 2 minutes till your wave start. That athlete without the wetsuit jumped in and when he came back up he was yelling all kinds of foul sayings in Spanish. I was dying of laughter inside. He was awake and ready to go.


As the swim started I was anxious to try out the bilateral breathing I had been working on. It was going well, but about 500 meters into the swim I was kicked in the face and had to stop to fix my goggles. For whatever reason I felt I could not get into a rhythm after that incident. I switched back to a one side breathing technique, and felt much more comfortable. For the rest of the swim I kept swimming in to slower swimmers and could not settle into a swim pace. It felt like stop and go traffic.


I exited the swim and noted that my swim time was the same as last years swim time. I hit my first goal, which was not to be slower than last year. J I made my way out of T1 and was wondering what kind of windy ride what to come. To my surprise the wind had died down and had changed directions. The first half of the 56 mile bike had a bit of a tail cross wind, where last year we faced a head wind on the way out. On the way back there was a bit of a head wind, but it wasn’t as bad as last year’s head wind. I focused on keeping my cadence flowing evenly through the rest of the ride.


This year’s bike ride finish took us through the airport, which I was not fond of. There were areas with uneven concrete and grass. I had seen several flats along the bike course and I did not need one with less than a ½ mile from the transition area. I made my way into T2 and took note that there were several bikes already racked. I’m used to seeing this knowing that my swim usually places me 5 to10 minutes behind the leaders in my age group. Though I was treating this as a hard training session, I find motivation in passing people on the run course.


I started the run leg, and took the first couple of miles to find my pace. I settled into my goal pace, and found it was pretty easy to maintain. It was getting pretty hot, and I could feel the heat from the sun beating down on me. I made it a point to sip on some water and take a cold wet sponge at every aid station on the run. At mile 8, all of a sudden my body temperature jumped up. I felt real hot, and begin to worry. I made it to the next aid station, took some ice, a cold sponge, water, and finished my nutrition. A few minutes went by, and I got my second wind.


My body temperature was back under control, and I was still holding my goal pace. I had planned on running a negative split for the last 3 miles of the race, but a hot spot developed under my right foot. I decided to back off, and just try to hold pace for the remainder of the race. I knew I was on track to hit my run goal, and I did not want to leave with any blisters that would keep me from training for any period of time.


I’d like to congratulate all those who competed this weekend. I’d like to give a special congratulations to all who PR, and were first time finishers. I saw many friends from the DFW area out there, and I’ve seen many Facebook posts of everyone’s accomplishments. It’s good to know that the DFW area has great active lifestyle presents. I’ve seen it grow over the past 4 years, and look forward to seeing it grow over years to come!


Thank you for reading this blog entry. As always feel free to email me any questions or comments you may have.