I've been fortunate to be able to live this healthy lifestyle and to share my experience and thoughts with others. I enjoy hearing about other’s success stories and being able to help out where I can to get them to their goals.

This year I had a couple goals not all were met, but I'm still grateful for being able to do what I love. I initially wanted to spend the first half of the season doing triathlons and the second have of the season focusing on trail running. was going to be an A race for me and as luck would have it I ended up being ill the week leading up to IM Texas. I would have to settle for a training day effort.

I ended up competing in 31 events in 2013 made up of 5 triathlons, 4 duathlons, 2 off road triathlons, 9 road runs, and 11 trail run races. Several of these races were to support friends or non profit organizations I’m associated with. I ended up with two “A” races for the year. Both were trail running events, Bandera 50k and 50.  I ended up approaching all other events as a hard training day. For a complete listing of my 2013 events please visit this link. Ignore the 2012 in the link it will take you to the right page. J http://www.trilifeblog.com/p/2012-race-schedule-and-results.html

There was a lot less swimming for me after May which I’ve found I’ve missed doing. My training also took a turn in October. For the first time I hired a coach. The approach is much different than what I’m used to. The training volume is much lower, but the intensity levels are higher. I’m using this training to prep for Bandera 100k and Rocky Raccoon 100 mile trail run. I’ve had a few set backs in my training with an ongoing knee issue that surfaced a week before 50 mile run. I’m hoping it will be a non issue in a few weeks.

This year I also ventured into my first off road triathlon, Xterra Cameron Park. I put this guy on my calendar to help me prep for the off road bike portion of the HHH Triple threat. I had no off road bike experience and wanted to get some race experience before the HHH event. Several Tri-Junkies made the trip to for the Xterra event. It was quite an experience as we found ourselves on one of the toughest off road bike courses in . We all suffered some scrapes and bruises, but in the end it was a good time had by all. Most of the same group also raced the C ME Dirty Off Road Tri a couple months later.

I had one more first which I must mention, Spartan Beast. I knew going into this race that it was going to be a challenge. I had done a few mud races in the past, however when comparing the obstacles and the course, well there is no comparison. If an obstacle was missed your gift was 30 burpees. Each set easily tacked on 2 ½ to 3 ½ minutest to your overall time. 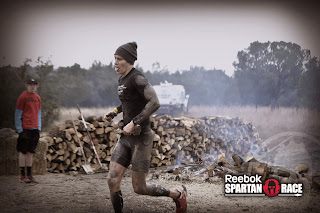 Spartan Beast in Glen Rose was just that, a Beast. There was no course description, aside from 12 plus miles, and yes, the plus came into play. The course length ended up being closer to 15 miles. Several sections of the course were freshly bushwhacked for the race. I’ll try and get a blog entry out on this race that will go in more detail. For now I’ll just say this course ranked up there as one of the toughest events I've done.

2013 training/race year was solid all the way around. It was filled with good friends and great times. I’m looking forward to training, racing, and seeing you all reach your 2014 goals.