Training week 31 of 36 had 19 hours of training in it. This would be my longest training week of my training program. I also had to incorporate the Toyota U.S. Open Olympic triathlon I had signed up for earlier in the year. Last year I went to the event as a spectator. I heard there were going to be some Pros racing and I wanted to see them compete. I had no idea that this event was the finally to a race series. I thought it was really cool to be able to see them race and it would be even cooler to race with them. That’s the main reason why I signed up for the event.
Going into this week I knew that my conditioning would be tested. I had just come off a ½ marathon race and I had one rest day before getting back into my Ironman training. I also had the Toyota Open Olympic event at the end of my long week. I was having second thoughts about racing. I didn’t want it to interfere with my training.

I was a bit sore and tired on Monday. I took full advantage of the rest day and did absolutely nothing from a workout prospective. Last weeks training took extra personal motivation to get my workouts in. I did not want to just “get through” the week so I made an attempt to get mentally into my training. I was sore during my Tuesday swim/bike and Wednesday run/bike workouts but, I pushed through them and felt good about my efforts.

Thursday rolled around. I had a long swim and a run on my plate. The weekend was fast approaching and while I was on my run I started thinking about my weekend’s workout and the Toyota U.S. Open on Sunday. I knew I was going to have to use it as a training race so I had to take that mind set with me into the weekend.

Friday was an easy swim day and I’m glad a friend of mine suggested we go get an open water swim in. I had not been in my wetsuit since late June maybe early July. When I purchased my wetsuit back in 2010 I decided to opt for the full body suit. I read that there was a buoyancy benefit. Well what I didn’t read but, later learned is that there is also more of an effort to get your arms moving in a full body wetsuit. I was hoping the practice session would help me break back into that wetsuit effort.

After my swim on Friday afternoon my weekend turned into a blur. My Saturday started at 4:20 a.m. I had a 5 hour computrainer ride, 45 minute run and 20 minute swim. I put in a good effort on the bike. I had the race the next day on my mind but, I kept telling myself it’s for training. I will benefit more by putting in a solid Saturday workout effort. I reminded myself throughout the workout session that the goal is IM Florida not the US Toyota. I got through my session and felt really a bit fatigued but, I also felt good. I headed over to packet pick up and was fortunate to find some people doing ART for free. I got my legs worked on. This was like finding gold. My legs needed it badly.

I scouted the 40k bike and 10k run and found that they were no picnic. I was hoping for a sub 1 hour 20 minute time but, after seeing the hills on both the bike and run I knew it was going to be tough to get there. I knew that Sunday’s race was going to hurt. My Saturday came to a close a little after 11 p.m. I’m usually in bed by 10 p.m. before race day but, I had family come into town and was playing host.

Sunday came around and I was up again at 4:20 a.m. It was race day. I decided to wear my Wheaties Fuel gear to this event. I was out the door and headed over to the event. I was able to get there by 5:30 a.m. just in time for transition to open. I got my stuff squared away and was ready to work. The day was great for racing. I felt real relaxed on the swim, maybe too relaxed as I missed my swim time by a few minutes. The bike was tough the first 5 miles felt like it was all up hill. The rest of the bike was rolling. We were either riding up or rolling down. I missed my mark on the bike by 3 minutes but, I had not accounted for the hills so I was happy with my time. The 10k run was also very hilly. The first mile was a steady climb the next four miles were rolling hills. The only fun part about the run was the last mile. It was mostly down hill. I kept focused on my legs I wanted to make sure I didn’t fall on my face.

The finish to this event was very cool. We got to run through a finish area that was lined up with people who were cheering us as we came through the finish line. I had no idea what my time was or where I finished. I knew I had a great training session and though I wish I could have pushed harder on the bike and the run I knew that my performance was going to be restricted due to my previous day’s workout. I met up with a fellow Team Wheaties Fuel member who was in my age group and finished in front of me. He asked me how I did; I told him I did not know. I asked him the same question and he was pretty confident that he won our age group. I congratulated him on a great race. He then told me he though I was second in our age group. Now that was a surprise. I was going to get my recovery run in but, I decided to wait for results. It turns out that I did not get 2nd in my age group but, I did get third. That was pretty cool. I was able to take home some hardware. I also was able to sneak in another ART massage before I headed home. J

As I drove back to my area I was seriously contemplating a nap. I knew I had a one hour run left to do and I started thinking of skipping it and just calling it a day. I got close to my house and starting thinking about IM Florida. I just could not walk away from the last hour of my workout. I decided to stick to the plan. I drove to the park and got my one hour run in. I took it nice and easy just making sure I got my time in.

I want to close out this week’s blog with a quick note. Each time I go to an event there is usually something that keeps me motivated. This Sunday I noticed an elderly overweight lady as she walked on the dock with her wetsuit on. I would have loved to have spoken with her to find out what is her motivation. I knew there were relay teams so I figured she was the swim member of a relay. I was pleasantly surprised to see her on the run course. I thought to myself how awesome is that? She was not on a relay after all. She was doing a sprint triathlon all on her own. I didn’t see her finish but, I’m sure she did. She looked real strong on the run. This is a great reminder that it is never to late to make a change and put forth an effort.

It was great seeing all my fellow triathlon friends at this weekend’s race. Congratulations to all who raced on this tough course. It was no walk in the park.

As always feel free to email me of you have any questions, comments or random thoughts. If you have a story to share I’d love to hear about it. 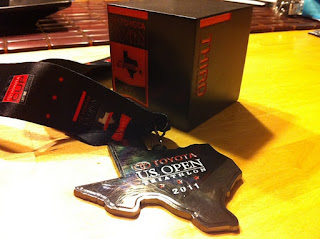 Hardware from the Toyota US Open.
Posted by Eloy Gonzalez "EJ" at 10:57 PM